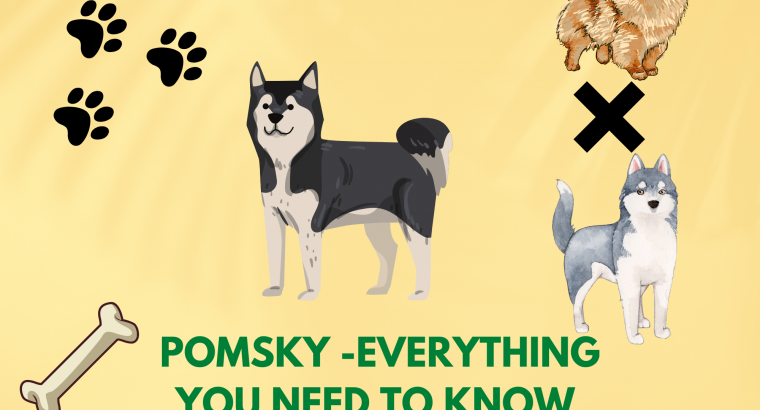 If you’re looking for an active, cuddly, and extremely loyal dog, then a Pomsky will be perfect for you. A mixed breed of Pomeranian and Siberian Huskies, these regular-sized dogs are known for their playful nature and intelligence. Pomskies are bred through artificial insemination and are sometimes available at animal shelters and rescue organisations. Here is everything you need to know about Pomskies before adopting one for your home.

The existence of Pomskies can be attributed to the internet. A Buzzfeed article went viral in 2011. The post had pictures of Finnish Lapphund puppies claiming they were a mixed breed of Pomeranian and Huskies. This Buzzfeed post sparked the initial demand for Pomskies, and Pomsky breeders started actively working on fulfilling these demands. The Pomsky dog breed was introduced to the public in 2012 through artificial insemination. The breed consists of Husky and Pomeranian parents and is becoming increasingly popular every day. Since this breed is relatively new, standards have not been established for it yet. After a few years, once the breed becomes recognized, standards and jurisdictions will be set. 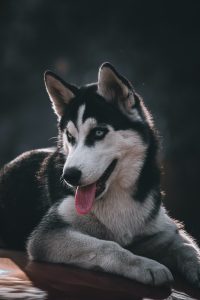 Because of the different sizes of Siberian Huskies and Pomeranians, natural breeding is tricky and unsafe. For this reason, Pomskies were bred through artificial insemination. Because of their riskiness in breeding, Pomskies are a bit rare to find and relatively expensive compared to other dog breeds. 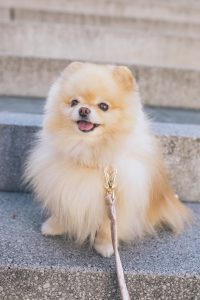 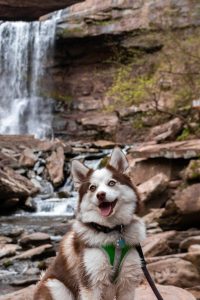 Since Pomskies are a much newer breed of dogs, they don’t have a specific standard for their appearance. For this reason, most Pomskies vary in size and colour. An adult Pomsky is a medium-sized dog, weighing around 35 pounds (25.87kg). Pomskies look more like the Siberian husky and have a large variety of coat and eye colours attributed to their two multi-coloured parents. The fur coats of Huskies can be a combination of white, red, blue, brown, and grey. Their coat patterns will also resemble the ones of their parents, giving off a cute little tuxedo look.

Because they have a fluffy double coat, you must take proper care of your Pomsky and groom them regularly. However, despite the regular grooming, you should not be surprised to find Pomsky hair covering every surface; Pomskies are known for shedding a lot of hair, especially during Spring and Fall. 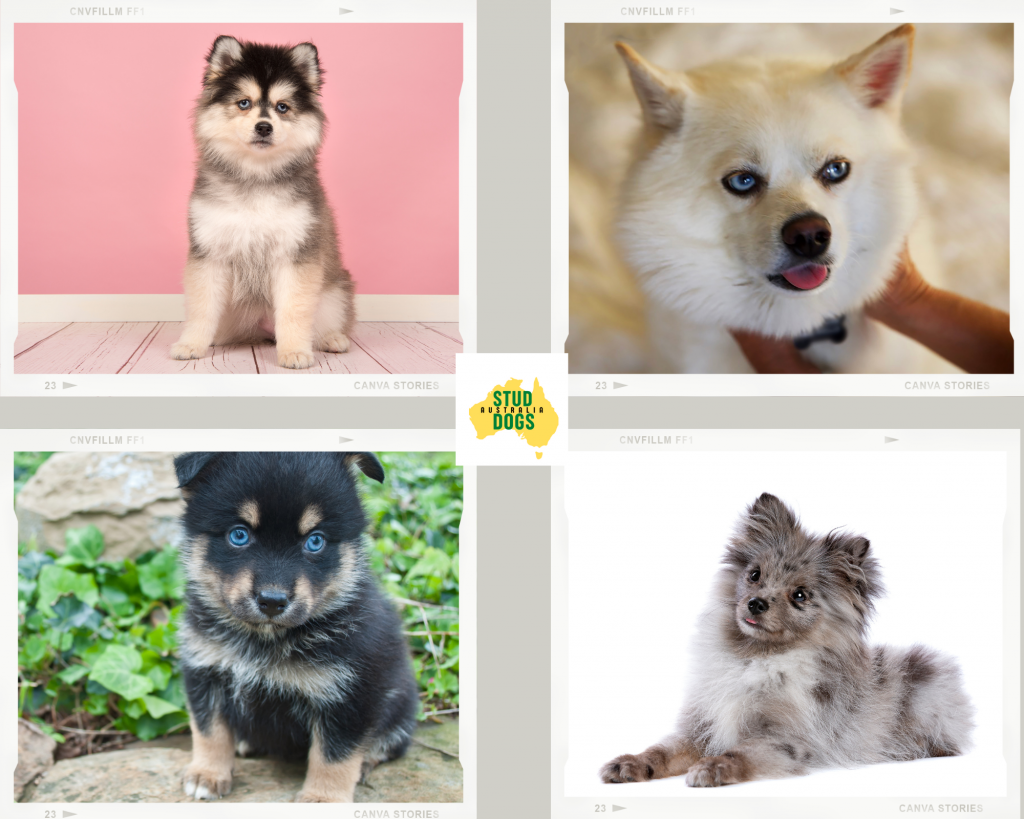 Pomskies are generally quite intelligent and have an affectionate and lovable nature. They’re very active and playful, with an insane level of confidence. Because Pomeranians and Siberian huskies are known to be loud and talkative, Pomskies are generally more vocal than other breeds. So if you live in a small apartment, have a low tolerance for noise, or have neighbours with the same attributes, then a Pomsky might not be the perfect fit for you.

Pomskies tend to be quite noisy because of their protective nature, which causes them to bark more frequently around strangers. Most people use their Pomskies as watchdogs because of their loyal and protective nature. Pomskies also tend to become attached to a family member, despite having an overall favourable temperament with the rest of the family members. It is not recommended to have Pomskies around babies or young children, as this dog breed can get particularly skittish around them.

Even though Pomskys have an above-average level of intelligence, they can be slightly difficult to train initially because of their stubborn nature. To properly coach your Pomsky, you need to be calm and assertive around them. Pomskies are not a proper fit for inexperienced dog owners or people with a low level of patience; being patient will allow you to train your Pomsky properly. Try not to get overwhelmed, angry, and frustrated around your Pomsky, as this can make them anxious.

Pomskies have a variety of eye colours, ranging from hazel to bright blue. You can also commonly find Pomskies with different coloured eyes, quite similar to their Siberian Husky parents.

Pomskies are pretty active, so taking a long walk every day will be enough to satisfy all of their extra needs. It helps if you have a yard where your Pomsky can run around and play before they sit down to relax. Since Pomskies have a double fur coat, they can easily withstand harsh winter weather. However, you will have to groom them regularly because they shed a lot. Most dog breeders recommend buying toys for Pomskies that help stimulate their minds, as they are dogs with above-average intelligence and tend to get bored if they aren’t using their senses. Toys such as Kongs, lucky mats, snuffle mats, slow feeders etc are great for keeping your pomsky occupied.

Pomskies have a lot of energy, for which reason they require a diet that is suitable for their needs. Currently, there are no feeding standards set for s Pomsky; Pomsky’s diet differs between each breed. You should consult a pet nutritionist or a vet about what you should be feeding your Pomsky to help meet their nutritional requirements. Since a Pomsky is a regular-sized dog, you’ll likely need a diet plan that is suitable for middle to regular-sized dogs. The most popular options for feeding pomskies are commercial kibble or a raw food diet.

A Pomsky is known to be a fiercely loyal dog and can develop separation anxiety from its owners, or the person that it is particularly attached to if they are away or do not provide it with the required level of attention. This separation anxiety can cause your Pomsky to whine, bark, and urinate.

As a relatively newer dog reed, there can be some health concerns associated with Pomskies, such as ear infections, dental issues, and eye issues. Siberian Huskies are known for having eye problems; naturally, it can be assumed that your Pomsky might face eye-related issues in the future. Schedule regular visits to the vet, and look out for signs of concern such as any inflammation or discolouration. Having regular checkups and observing your Pomsky closely will keep them healthy and happy. 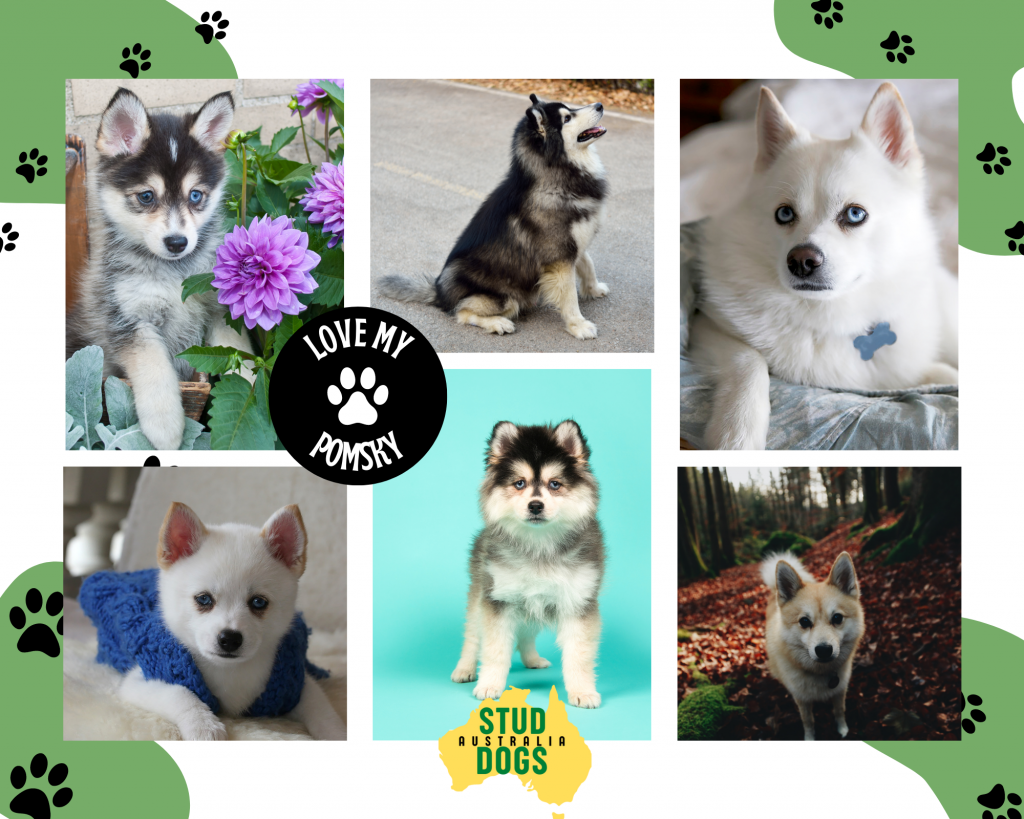 A Pomsky is a luxury breed of dog, quite popular worldwide. A Pomsky is a mixed breed of a Husky and Pomeranian. Usually, Pomskies can be bred through a female Siberian husky and a male Pomeranian. The Pomsky breed started around early 2012 and started gaining popularity after it went viral on the internet. Nowadays, Pomskies are one of the world’s fastest-growing mixed breeds and continue to gain popularity in different households.

Generally, a Pomsky’s weight will be around 15-30 pounds (6-15kg). However, how large a Pomsky gets in size depends on the genetics of the puppy; how large the stud dog is and the breeding female.

Pomskies are a mixed breed of Siberian Huskies and Pomeranians. On the intelligence list for dogs, Pomeranians were placed at 23 while Huskies ranked at 45. Generally speaking, Pomskies have above-average intelligence and can train without complications or issues.

5.  Do Pomskies Shed Their Fur?

Pomskies go through significant shedding periods twice a year and need to be constantly groomed throughout the year. They are not a suitable breed for people with allergies or asthma.

Unlike other dog breeds like poodle mixes, Pomskies are not hypoallergenic.

7.  How Often Should You Groom a Pomsky?

If you own a Pomsky, you need to brush their coat regularly. Pomsky breeders recommend brushing your Pomsky once or twice every week. Your Pomsky will also need blowouts during Spring and Fall, primarily known as their shedding periods. During these seasons, you’ll probably have to groom your Pomsky 4 to 5 times every week. Pomskies require a lot of upkeep and grooming to look presentable.

8.  How Often Does a Pomsky Need to Exercise?

A Pomsky is a mixed breed of active dogs, so naturally, it is the same. A Pomsky needs to be taken out for a walk every day. Pomskies should live with families who have large yards so they can run around and exercise of their own will.

9.  What is the Lifespan of a Pomsky?

A Pomsky that is well cared for can be expected to live for around 12-15 years.

10.   Do Pomskies Interact Well With Children? 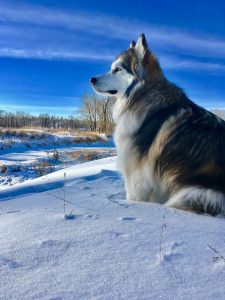 Yes, Pomskies are very good and interact well with children. However, you need to set boundaries between your Pomsky and your children so they can develop a close bond and harmonious relationship.

Pomskies are a perfect fit for athletic people who have ample space in their homes to let their dogs run around, exercise, and play. While Pomskies can be funny creatures to have around, you need to keep up with all their demands and needs. These dogs are also a newer generation of mixed breeds, meaning that there are no standards set for their medical ailments, demands, and requirements. However, if you’re willing to take the risk and need a walking partner for your daily walks, then a Pomsky might be the perfect furry friend for you.

If you’re looking for a pomeranian stud, siberian husky stud or pomsky stud, check out Stud Dogs Australia to find a stud dog near you!